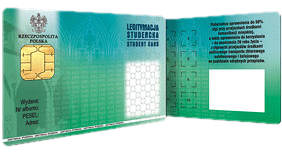 Each student of PUT is issued a picture identification card. It enables the student to have certain privileges and services within the University (library, computer labs, discounts on train, tram, museum, theatres, cinema tickets).

Examples of inappropriate dress in an official occasions:

Our outfit is a part of our image.
A smart outfit may be beneficial to our self-presentation, eg. during the interview in order to get a job or internship.

Smoking is prohibited in most public places in Poland. There is a special smoking room at the PUT. Smoking in classes is not allowed. Soft and heavy drugs are strictly prohibited. Drinking alcohol in public is prohibited.

It is possible to pay by credit card. The most popular are Visa, MasterCard, American Express, and Maestro. They are accepted almost everywhere.

Public telephones require special tokens or magnetic cards which can be bought at Post Office (Poczta) or newsagent (Kiosk).

The maintenance of public order and citizen security in Poland is the responsibility of the police and the municipal police.

Police - uniformed and armed force, which main goal is to serve and proctect the people, and to maintain public order and security.

The police is authorised to:

The municipal police are appointed by the municipal or communal council to maintain public order in the territory of a given municipality or commune. Municipal police do not operate in every single town and commune. One of its tasks is to control the road traffic and to maintain public order (you can get fined for parking in the wrong place, pay close attention to where you can and cannot park!). They often cooperate with event organisers and other services to maintain order during gatherings and public events.

There is a universal emergency number 112 which you can dial without any area code.

23% or 7% VAT is added to most goods and services. Prices in shops always include VAT.